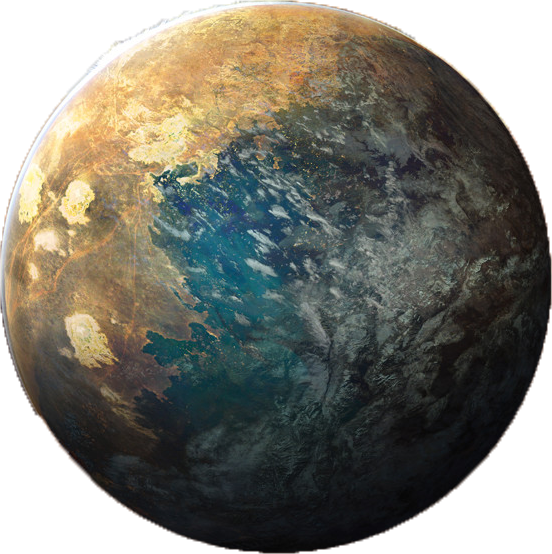 A newly founded colony as of late 2298, it is quickly expanding with the help of the significantly reduced gravity lowering construction costs.

A world covered in seas and mists, Novoid is the third planet and first of the planets in the habitable zone. Protected by a strong magnetic field, it has ridden out all but the most aggressive of solar flares and hurtles around its host star. Tidally locked from proximity, it has a radius 78% that of Earth, a mass of just under 30% of Earths, 48% of Earth's Gravity and 61.6% Earth's density. It has a significant amount of what mass it has in the form of water, which has lead to a large ocean covering the vast majority of the world and going hundreds of kilometers deep, with some reckoning it goes to the mantle itself. Despite that, there is still one large landmass on the planet with alien life on it. Its atmosphere also contains a large amount of argon in it. While by it self inert, large concentrations of it can lead to areas of the planet having its oxygen displaced, a dangerous prospect which could quickly lead to death in humans. To counter this, colonization plans have involved using weather control towers like those on Mars to ensure that there is a constant flow of air by the colonies. As to what this would do to local wildlife is unknown, though many of those calling for this plan do not seem to particularly care.

While originally there are no permanent residence on the planet and because of the relatively low escape velocity, Novoid is one of the chief places for the Chonaire company to abstract its water beyond Ulm. As such, the planets "Trade" currently is purely extra-planetary. If the planet was to receive a permanent outpost then it would be able to expand towards food production to assist Ulm and the Greater Federation, though the gravity of the planet is at present considered a hazard making any benefits not worth it for the current size of the planetary system.

After the Progenitor menace and civil war, the planet was occupied with a small population. This was both to aid with the prior water abstraction, and to create a small fur trade, animal exporting & tourism sector to exploit the Possuat found on the planet.

A living world by most accounts, its low gravity and breathable oxygen has allowed life to grow from the planet with scientists determining Novoid as where life in the system originated from. Because of the stronger magnetic field that in its inhabitable sibling (Though it is not known as to why) its life has evolved down a different path, not needing exoskeletons to such a degree, with smooth skin being the norm. The life is also rather docile, with even the largest of the predators on the planet preferring to flee from the humans that arrive on the planet. As such, it is not unknown for some of the smaller life forms to be absconded during trips to the planet, to be taken to aquariums on Ulm or as pets.

The main animal which is taken for a pet is the Spheo biriens, the scientific name of the animal lovingly called Possuat after its resemblance to certain Earth animals.Growing up to 20 inches long and covered in marked fur, it has two elongated ears and a long tail which ends in a design akin to a set of long leaves. Living in the dense forests of Novoid, it tends to live on the tree branches above predators and jumping from tree to tree. However, it is still spotted on the ground, scavenging for insect life to eat. Exceptionally friendly,curious and overall docile, if it feels threatened or in danger, it will still defend itself. Those that supply an underground pet trade of the animal have come to recognize the sign; It's tail moving low over itself and generally looking like it will pounce as it backs away. Despite this, there are ways to calm it back down, often involving the offering of food.