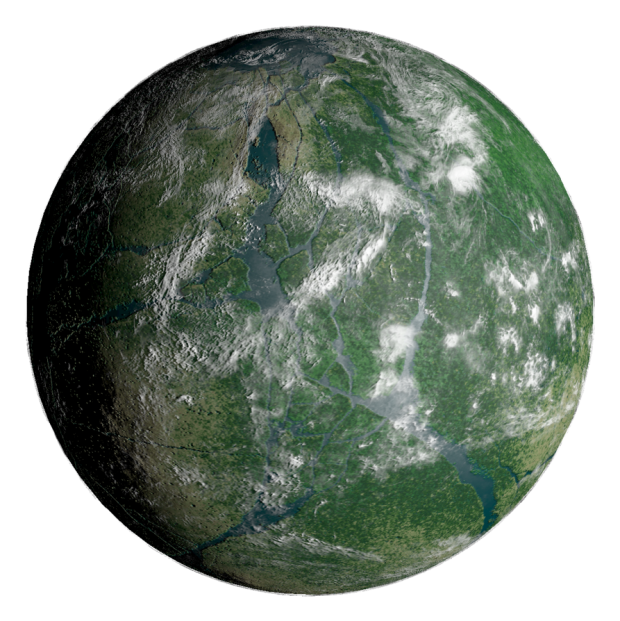 Qetesh is a planet in the Proxima Scorpii system colonized as early as 2109. Noteworthy are especially its beautiful waterfalls and "rainforests" all around. It is not only home to very thick jungles and a dangerous swampland biome, but also to the precursors found on this planet dubbed "Gruddekx". Qetesh is one of the colonies not expected to grow in a long time; initially colonized as a green paradise, humans quickly found that the jungles are often too thick to be traversed. As such, Qetesh has a huge space problem. Scientists advise against burning down the jungles of the planet as that would devastate the eco-system.

Hanus - Qetesh's most prominent settlement, honed out of the thick jungle. Most people who live on the planet live in Hanus.

Discovered in 2099, it was evident Qetesh could be a green paradise. This green paradise became a green hell in 2107. When set out to colonizing the planet, the FSA had huge issues finding a landing spot for initial colonization. The planet was covered in such a thick jungle that the Federation had to announce a special mission to drop humans via drop pod onto the surface of Qetesh to burn a suitable colonization site. The Federation paid the price shortly after - the planet revolted against this act and the burned site was covered in microbacterial fumes that were later found out to be the cause of death for the 20 agents sent to burn the jungles. It is unclear whether this was the reaction of the burning itself or sheer incompetency of the ground team as they made contact with something toxic on the planet. This was the only reported case of people dying to this bacteria and it has since then not been further researched. Two years later, the Federation founded the first and only colony on Qetesh, Hanus. Since then, no further expansion attempts were made.

On the other hand, the extinct race of the Gruddekx could have had a hand in this. They appeared to be a sentient reptilian race in the stone ages as they went extinct. One theory was that they were highly evolved and such deadly predators that they reproduced faster than their natural enemies and therefore starved to death.

The more popular theory among the people of Qetesh is that the Gruddekx suffered heavily during "The Flames" in 2107. It is assumed that, during the ignition of the jungles, big parts of the population burned to death. The omnivoric reptilians could have emitted the toxic clouds as they were ignited.

It is an open secret that outside of the city of Hanus, in the thick jungle of Qetesh, you're in no-mans-land. As the Federation has given up colonization of the planet (and no terraforming attempts were made because the colony has nothing of major value), it only really cares about the 200 or so citizens and civilians in the city of Hanus.

As such, anything that lies outside of the city skirts, and everyone makes sure it is exactly outside of the Federation's area of influence, it is primary home to pirates and other lawless figures. There are many who have taken it to themselves to settle the jungles of Qetesh, living as indigenous tribes on Earth's rain forests were, but most of the time it is futile. Many pirates find these encampments for a steady income of slaves. The Federation has their hands tied as they are not even aware of the encampments or the people born within them and frankly, finding them in the thick jungles would be very dangerous and borderlines a miracle.

Being an abandoned colony, the people of Qetesh have a split culture. Either they are extremely loyal and clinging onto what remains of the Federation, or they are essentially lawless traffickers or pirates. People from Qetesh make do with what's there, openminded but very traditional.

Due to the nature of the planet, people native to jungle biomes were selected to colonize this planet. This has resulted in Qetesh being a mix and melting pot of South-Eastern Asians and Polynesians.

Strecatism, or Wanders of Zuxakyo, is a new religion with one god and a handful of minor gods. Their main teachings revolve around sacrifices and the light, and these teachings are often passed on through communal praying sessions and meetings with religious leaders. Zuxakyo is the supreme god ruling above all, which is why all sacrifices are made to him in his name. While Okros is the god of the hunt and sacrifices, he is only considered as some sort of guardian of procedure. Should the sacrifices not be to Okros' liking, it will anger Zuxakyo. In these regards these two gods act as a synergy, complementing eachother. Strecatism's teachings come from edicts said to have been given by the daughter of god as a blessing and gift to all. All of their religious symbols are represented in the form of incense, paintings and wood carvings.

Despite being a new religion, Strecatism has managed to fracture into different groups with their own interpretations of the religious works, but these splits were met with a lot of resistance from the original side. Strecatism is often met with indifference by those outside of this religion.

The economy of Qetesh is relatively small. The factories are of little interest and are only maintained by the government of Qetesh to ensure workplaces for the population. When initially colonized, the Federation tried to turn Qetesh into a breadbasket. The conditions on the planet were ideal for crops to grow, had the planet not its own mind. The soil of Qetesh did not support imported crops and engineering them to be compatible would have cost half a fortune. Therefore it was decided to not use the huge space on the green planet but rather go with quality over quantity take what is there. Qetesh is home to exotic fruits and crops that, despite being widespread, don't grow in very large numbers. While undeniably tasty, these fruits and crops aren't very widely known in the galaxy - primarily because they are such luxurious (and pricy!) goods that only the best cooks and the very rich get to enjoy them.

Naturally, harvesting such little amounts don't net the people of Qetesh a very big income. A lot of Qeteshians perform this kind of agriculture besides their factory jobs. Recently, scientists have managed to manipulate Kuupa Berries, enabling the people of Qetesh to actually grow them in an industrial manner. Despite being grown in a controlled enviroment, these Kuupa farms had the growth of the local Phalacrocorax Mascarin population as a sideeffect.

The landscape of Qetesh can be divided into two specific biomes: The Swamps and the Jungle.

Not very far away from the outskirts of Hanus, and some official city parts even being located inside it, lie the Mighty Wilds, the jungle of Qetesh. Should you decide to dwelve into them, you will make a one of a kind lifetime experience. The jungle is incredibly thick and houses a huge flora. You can tell that this area of the planet is especially well preserved. This is probably because the nature is incredibly aggressive in these parts. Trees not only grow especially fast, but also reach a lot of height aswell. It is unknown what causes this, but it is assumed that the synergy of the local flora in these places act as some sort of fertilizer to themselves. Some even suggest that the imported fauna, which lives and dies in these jungles add to the overall growth cycle of the trees with their well decomposing remains. Depending on where you are headed, you might stumble across Qetesh ruins buried deep within the jungle, the Wowani Jungle. It is unknown how and why the Gruddekx erected buildings here - researchers suspect some sort of religious practice behind it. Some go even further and claim that Gruddekx were very connected with nature and were some kind of druids, worshipping the admittably admirable nature of Qetesh. Overall, the Qetesh jungles are often used by not only local but also external Mobile Infantry units for survival and jungle training and unit cohesion exercises. On the other hand, some Mobile Infantry commanders have explicitely rejected going to Qetesh, because "the vastness of the jungles will devour us all".

The Deep Basin, where the "mud people" live.

The Swamps themselves are not very often visited by people and if so, usually by travellers who meant to visit the Gruddekx ruins but failed to read the map proper. They often return shocked and show signs of Qetesh Swamp Fever. The Mobile Infantry does not visit the Swamps of Qetesh- atleast officially. On a Platoon level, some daring Commanders seek out the Swamps as some sort of initiation ritual where the Troopers set out in the Swamps by night, the Abyss of Coatistead to be exact, and, should they return to their unit, be a renowned Khurtug, a "Qeteshian Man" or a "Swamp Strider". Should you dwelve too deep into the Swamps of Qetesh you will arrive at the Infernal Mire. Absolutely, positively nobody enters the Infernal Mire unprepared and leaves it alive - atleast not on known records. The incredibly thick, green-hued mud will almost instantly suck you in. FFRL Scientists, even with specialized gear, have underestimated these swamplands once and within a split second, Prof. Dr. Scavuzzo sunk ankle-deep into the mud. The substance in these swamps is barely thin enough to allow objects sink in - but it is so thick and unforgiving that absolutely nothing comes out again. In the case of Prof. Dr. Scavuzzo, not even heavy machinery could release him from his tragedy and he was eventually swallowed by the muds of the Infernal Mire. On the other hand, the local flora is also contributing to the deadliness of the Infernal Mire. The trees all along the swamp are home to a specific kind of mold, Pnaencuphax. While being a beauty in its own, it takes in the methane in the air and in return radiates an incredibly toxic gas which attacks human airways and eyesight. Scientists estimate this mold, or rather the toxic gases, to be utterly aggressive, reasoned with the abundance of any kind of animals around these swamps.